8 Creative Ways to Use Evapo-Rust® to Quickly Remove Rust 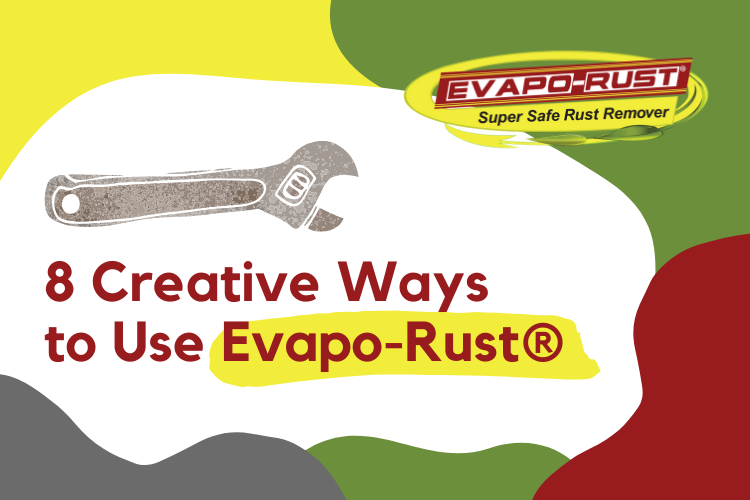 What are some creative ways to use Evapo-Rust®? Let’s find out!

Evapo-Rust® is water-based, environmentally safe, non-toxic, and non-corrosive, containing no acids to irritate your eyes, skin, or nose. It’s also safe to use on un-rusted steel, plastics, PVC, cast iron cookware, toys, and most painted surfaces that may be in contact with rusty metal hardware.

For over twenty years, we’ve seen Evapo-Rust® used creatively on many items. The U.S. Army, U.S. Navy, U.S. Air Force, FBI, NATO, government contractors, auto enthusiasts, gunsmiths, farmers, antique restorers, and more have all used Evapo-Rust. We have collected a list of the less common items you can use Evapo-Rust® on. Let this list inspire your next rust-fighting project!

What are Other Ways to Use Evapo-Rust?

Roof of a Vehicle

To remove rust entirely, soak items in Evapo-Rust® overnight. If a surface cannot be fully immersed, soak a rag in the product, and apply the cloth to the rust stain for 24 hours.

Here’s a great example of ways to use Evapo-Rust®. It can be frustrating to peer on top of the roof of your truck or van and see it covered in rust. How are you going to soak the roof of your vehicle? People have had great success by soaking a synthetic chamois in Evapo-Rust and laying it on the roof (or another large surface that can’t be soaked). We recommend covering the cloth/chamois with plastic to keep it from evaporating.

Rust will eat away at the metals of firearms, causing discoloration and even pits in what should be a solid surface. If rust is visible, address the issue immediately. Disassemble and clean the firearm to remove excess dirt and oil. Pour enough Evapo-Rust® in a container with the gun parts to completely cover them. Immerse the rusty gun or part in the solution and leave it for 30 minutes for light rust or up to overnight for extremely heavy rust. Rinse with water and allow to air dry.

A word of caution. Evapo-Rust will remove bluing in about 30 minutes, but not anodizing. Powder coating and paint will not be removed if the paints do not contain oxides.

Most of the blades that sword collectors see are rusty. There are two main types of rust: the black patches and pitting of dead rust and the dusty red of active rust.

Depending on the extent of the rust on the sword, once removed with Evapo-Rust®, no further treatment is required. In some cases, residual rust may still embed in the metal (pits, crevices) after the initial soaking. In this case, rinse the metal with water and re-soak in Evapo-Rust®. All residual rust will be removed from these hard to reach places.

Always rinse the metal after treatment with Evapo-Rust®. Tiny molecules of iron will still be in the Evapo-Rust® solution, and you must rinse these molecules off with water, or they will activate the re-formation of rust.

Other ways to use Evapo-Rust® are to remove the rust from a motorcycle or ATV fuel tank in one of two ways, depending on if your tank is still attached or has been removed:

For dipping engine blocks, we recommend the 55-gallon drum size. Hoist the block into the drum. Depending on the size of the engine block, there should be enough liquid to displace and cover the block without spilling out.

We’ve heard that some creative customers have placed rusted curtain rods in their bathtub to de-rust them with Evapo-Rust®. It’s a pretty good idea. No matter what material of your tub, Evapo-Rust® will not harm it. Evapo-Rust® is safe for the user and does not harm brass, copper, aluminum, gold, lead, titanium, steel, cast iron, chrome solder points, vinyl, plastic, rubber, silicone, glass, cork, or wood.

Whether you have a rusty Coleman lantern tank like this customer did, or an old railway lantern waiting to be restored to usefulness, soak the lantern in Evapo-Rust®. The lantern doesn’t have to be completely clean before de-rusting as Evapo-Rust® has detergents that penetrate oils and dirt. However, surface contaminants do slow the process and shorten the life of Evapo-Rust® Heavy greases and cosmoline should be removed prior to de-rusting.

If you left your bicycle in the rain for too long and the chain rusted or you need to restore a bike on a budget, Evapo-Rust® can restore your bicycle’s spokes, chains, handlebars, frame, and other metal parts to get you on the trails again. Evapo-Rust® does not harm paint but you should avoid paints with oxides.

Pro Tip: Evapo-Rust® is reusable, so you don’t need to discard it after soaking your tools.

Evapo-Rust® has an indefinite shelf life and is reusable until its effectiveness starts to wear off. In general, one gallon of Evapo-Rust® will remove half a pound of pure dry rust.