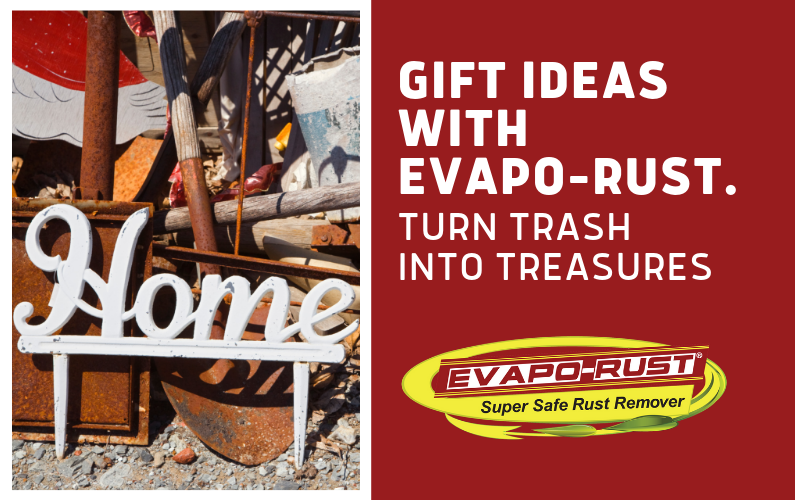 As the holiday season approaches, it’s time to find the perfect gifts for your loved ones. But are you passing up possible treasures simply because they’re rusty? Here are some gift ideas with the help of Evapo-Rust.

Let’s say you’ve found a great potential gift, but it’s covered in rust. Perhaps you’ve stumbled upon an ableskiver pan for round Danish doughnuts or cast-iron cookware that’s perfect for cornbread, just like your grandma used to make. Evapo-Rust Super Safe Rust Remover can restore these cast-iron items for you and your family to revive these heritage recipes. After using Evapo-Rust to treat the items, you’ll be serving up brunch or making special, traditional meals this holiday season in no time.

Or perhaps you found your grandpa’s old, metal toolbox languishing in the garage. With Evapo-Rust’s help, that rusty box could make a perfect, upcycled planter.

With Evapo-Rust, you can hunt for bargains at flea markets with new eyes. For example, let’s imagine you stumble upon some prettily patterned plates and rust-covered candlesticks. After applying, Evapo-Rust Super Safe Rust Remover, you have gorgeous, custom partyware, just in time for the holidays!

On the other hand, Evapo-Rust Super Safe Rust Remover itself can make an excellent gift! If your dad’s tools are languishing in the garage, or the metal on your mom’s classic car is begging for some attention, Evapo-Rust can come to the rescue.

Evapo-Rust removes rust and does all the work for you. No need to scrub, sand, sweat, or mix labor-intensive solutions. With Evapo-Rust, just soak, rinse, and dry!

Evapo-Rust Super Safe Rust Remover is an environmentally safe, non-toxic water-based product. It’s safe on skin and eyes as it has no acids, bases, or solvents. You can usually simply and safely dispose of the Evapo-Rust solution down your drain.

You can also reuse Evapo-Rust Super Safe Rust Remover several times before the solution is spent. One gallon can de-rust up to 300 lbs. of steel. A little goes a long way!

From restoring to upcycling, Evapo-Rust can help you find (or be) the ideal gift!