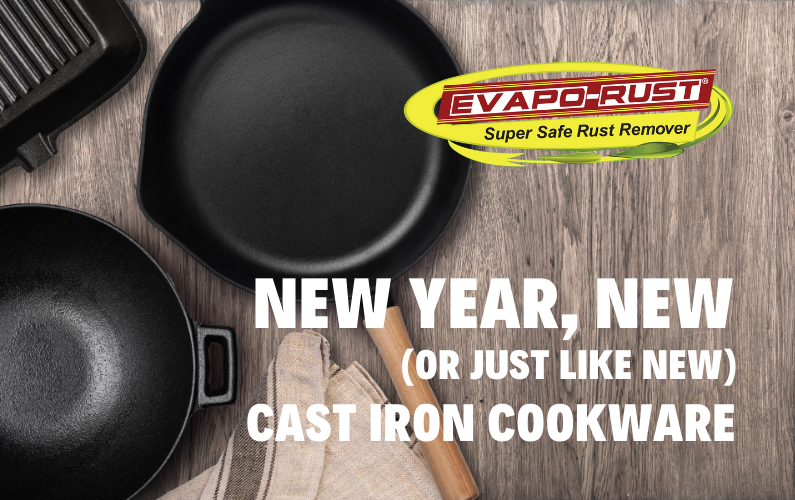 The team at Evapo-Rust® swears by our cast iron cookware. We collect them; we hoard them; we consider them family treasures. It’s our humble opinion that you haven’t truly lived if you haven’t had cracklin’ cornbread cooked in a cast-iron skillet. We firmly believe that it’s a work of art and home cook essential.

Cast iron cookware needs to be cherished. Heritage, mouth-watering homemade biscuits, fried chicken, pancakes, and the perfect steak are worth some elbow grease and TLC.

Whether you purchased new cookware or were fortunate enough to receive heirlooms with 70 years of cooked-on grease, Evapo-Rust® Super Safe Rust Remover will help you care for your pots, pans, and skillets.

Rust is the enemy for those cooking with cast-iron. We beam with pride when our customers tell us they love Evapo-Rust®. Evapo-Rust® removes the rust easily, and it’s safe enough for them to use on cookware.

You can use Evapo-Rust® on your cooking supplies without having to worry about harmful chemicals on your food because it is non-toxic, safe on skin, and leaves no residue. With Evapo-Rust®, you never have to let a rusty skillet get in the way of cooking a great meal!

How to Use Evapo-Rust® on Cast Iron Cookware

Four steps will remove the rust on your cookware:

Step 2: Immerse the rusty object in the solution. For light rust, let it soak for ten minutes. For heavy rust, soak overnight.

Step 3: When finished, rinse with water. If deep rust remains in pits, re-immerse the item until all the rust is gone. Un-rusted metal will not be affected. NOTE: This stage is very important.

Step 4: To prevent flash rusting, dip the item back into the solution. Then allow the piece to air dry. Letting it air dry will prevent rust for up to two weeks. If the iron does flash rust in the future, simply scrub Evapo-Rust® on the surface.

Once you’ve removed the rust, re-season the pan. Place the pan in the oven at 200°F to eliminate any moisture and open the pores of the metal to receive the oil. Coat the pan lightly with oil (organic flaxseed oil is recommended), rub off the oil with a paper towel or cloth, and place the pan upside down in the oven. Heat the oven to the highest temperature (450-500°F) and let the pan heat with the oven. After an hour at the hottest temperature, let the pan cool in the oven for two hours. Repeat several times for the best results. When seasoned properly, cast iron will last for many lifetimes. Your grandmother will be impressed.