How to Have Rust-Free Tools in Four Simple Steps 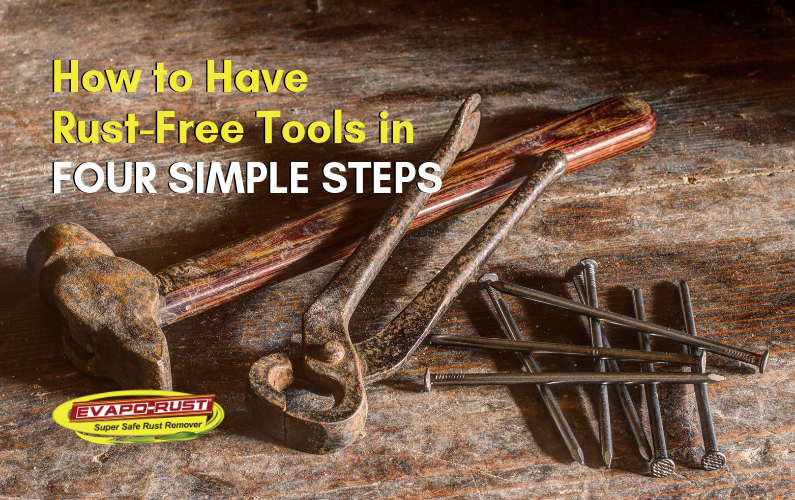 Evapo-Rust is a safe and effective product to use to attack rust on your tools. The active ingredient in Evapo-Rust bonds to rust while leaving surrounding materials unharmed. Here’s how to have rust-free tools in four simple steps.

Place the rusty part in the container and pour in enough Evapo-Rust to cover it completely. It is essential that you completely submerge the metal in the Evapo-Rust. Once completely immersed, cover the container so that you don’t lose the Evapo-Rust to evaporation. If you are unable to submerge your part completely, you may be able to remove the rust in sections. Leave the object immersed partially until the rust on that area is removed, then rotating it to the next section.

Use Evapo-Rust at or above room temperature. Occasionally check your item, wiping away the Evapo-Rust to see how the rust removal is progressing. A lightly rusted piece may only need to soak for 10 minutes to half an hour. More substantial rust on the item may require eight hours or longer. Evapo-Rust will not harm the metal, so don’t worry about soaking overnight without constantly checking it. When you submerge a rusty item for hours, the Evapo-Rust may change from yellow to brown and then to black.

3. Remove the object and save the Evapo-Rust

Evapo-Rust requires no special equipment or hard scrubbing. When rust removal is complete, you may notice debris covering the item. The Evapo-Rust itself may be darker and full of sediment. You can return unused portions to the bottle for reuse later. When Evapo-Rust is black, it will not remove any more rust, and it is time to dispose of it. You can safely dispose of the biodegradable solution into sewers and drains.

Spray the item with a hose or dunk it in a bucket of water. You may find that you need to use a sponge or a brush to clear some of the loose material. Once the item is cleaned off, dry it as much as possible to avoid rust reforming. To prevent flash rusting, dip the piece back into clean Evapo-Rust. Then allow item to air dry. This will prevent rust for up to two weeks. Or spray with Rust-Block to prevent re-rusting for up to one year.

For even more specific tips about how to have rust-free tools and more, check out our How-To Videos.