Wanted to let know what a GREAT job Evapo-Rust did on this antique milk can.  Attached is a before and after photo.  FYI before soaking, I sanded the milk can to remove the surface rust. See the Before, After, and Finished Project images below: 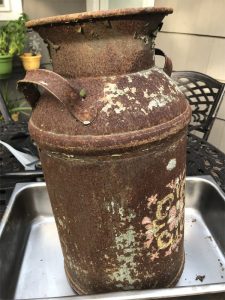 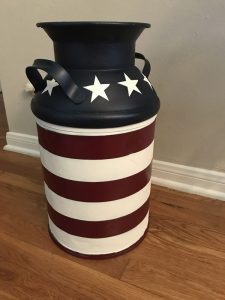 Evaporust is the only thing I use to strip and clean rust on my antique tools. It leaves the jappaning completely intact while getting rid of the heaviest rust. Definitely an 11 out of 10.

I’m currently using a gallon of Evapo-Rust to get the rust out of my grandmother’s sewing machine. This thing hasn’t been used in at least 30 years and time hasn’t been kind to the cast iron. I’m using a pond pump to get it to flow through the inside of the machine and it is working wonders! When we first looked inside the machine you couldn’t tell what parts were due to the rust. Now it’s almost ready for me to try to undo some bolts, polish up the camshaft and start sewing with it. I have a before photo and a 2-hours later photo that are like night and day. This stuff is amazing! I can’t wait to use it on my 51 Ford.

Currently using Evapo-Rust to remove rust from my grandfather’s 70-year-old Rae bench vise, which had been sitting exposed to the elements since the 1980s. A few days of soaking in pure Evapo-Rust worked wonders. Even within the first day, the rust was lifting; I am confident the Evapo-Rust would have worked faster, but the vice had a lot of dirt buildup which I neglected to clean, and residue from ATF and diesel, which I had used to get it unseized. The pieces are now stripped down to bare metal, including the inner threads which would have been nearly impossible to clean with a wire brush or other mechanical method. Wish I had learned about this stuff sooner. It’s now my go-to for any type of restoration work.

I was skeptical to use your product. I had bought a 1970 Datsun Roadster a couple of years ago. It had a seized motor and since I bought it I have been trying to “free up” the motor. I said what the hell let’s try Evapo-Rust! I’m not exaggerating when I say this… I put your product down each of the cylinders filling them up until each one had the product visible in the spark plug holes. I was anxious to see the results, I only waited 45 min before trying to break it free. Low and behold after a couple of minutes of trying I had fluid shooting out of one of the holes! SUCCESS!! After 5 min of rocking it, it was gushing from all cylinders. Needless to say, I filled them back up again and I’m going to let it sit overnight. I’m thankful for trying your product. Thank you for an amazing product!!

I have a .54 Cal. muzzleloading rifle which (probably due to my own neglect) developed a coat of rust over the complete inside of the barrel. Can’t tell you how many hours I worked or how many procedures I tried. Then I heard about Evaporust. Plugged the nipple hole in the barrel, filled the barrel with Evaporust, covered the muzzle with plastic and nine hours later it looked like it did brand new. So great. That’s not all, when it was done I didn’t pour it out; it went right back in the container as per instructions. GREAT STUFF!!!

Great stuff. I had seen it advertised, but as with many things, was quite skeptical of the claims. I just used Evapo-rust on an old hi-lift jack that didn’t work correctly anymore due to the mechanism being rusted. I soaked the jack in Evapo-rust overnight and it came out looking like it had just been made. Rinsed it, dried it, and repainted it black. Works as good as a new one.

Was very skeptical at first but now I’m sold. I love this stuff.

Best product on the market! Have been buying for 3 years and I love it.

Shop at a retailer near you